Book a transfer to Cómpeta from Malaga Airport! | Enjoy your holidays

When you arrive at your holiday destination, what you want is to find your hotel quickly so that you can leave your suitcase and enjoy the city.

Therefore, getting a transfer to Cómpeta from Malaga airport is essential and will also help you feel comfortable, safe and rested.

The important thing in the holidays and not having to worry too much, in Malagacabbie we know it.

Stepping inside of your transfer to Cómpeta from Malaga Airport? Let’s talk about history first

There are no written documents on the origin of Cómpeta. A hypothesis based on the etymology of its name, everything seems to indicate that the name of Cómpeta is of Roman origin, from the Latin COMPITA-ORUM, which means crossroads.

And it is for this reason that in this locality the Romans celebrated festivals in honour of the lares (gods) of the roads that also took advantage of for commercial transitions.

At the foot of the mountains, one road joins La Alpujarra with La Axarquía, and another joins the coast with Granada, a road that until a few years ago was used by muleteers.

The crossing of both roads takes place in Cómpeta; although it is true that the main communication routes with Granada are those of Motril and Velez-Málaga.

But the first known document where the locality is mentioned, dates from April 29, 1487, capitulated before the Catholic Monarchs in Velez-Málaga and was already a consolidated municipality.

Participated actively in the Moorish rebellion in the well-known battle of Frigiliana and with its defeat most of its population was banished. date of the surrender of the towns and places of the Sierra de Bentomiz.

At this time Cómpeta was a consolidated town, as it had a population close to six hundred inhabitants. dedicated to the cultivation of the vine, the olive tree and the breeding of silk worms, so that in its environment there were many mulberry trees.

Cómpeta is located in the S.E. of the province of Málaga, in the southern foothills of the Tejeda and Almijara mountain ranges and in the heart of Axarquía, to which it belongs.

It has an average altitude of 638 m. above sea level. It covers 5,530 hectares of which 2,030 hectares can be considered arable land and the rest, 3,500 hectares of woodland.

The total built-up area is 50 hectares in three perfectly differentiated areas as the two ravines cross from north to south, the Perez and Granada. It belongs to the judicial district of Vélez-Málaga.

Before you step out of your transfer to Cómpeta from Malaga Airport, choose where you will go and how you are going to spend your day at this beautiful city.

The Parish Church of Ntra. Sra. de la Asunción is located between C/ Rampa and Plaza Pantaleón Romero, in the historic center of the town of Cómpeta.

The Parish Church was ordered to be built on May 25, 1505 by Royal Decree of Isabel the Catholic. It is one of the most emblematic buildings in Cómpeta.

The church has three naves separated by semicircular arches and Mudejar coffered ceilings. The High Altar and the baptistery have frescoes by the Veleño painter Francisco Hernández.

The tower, 37 metres high, is in the neomudejar style of exposed brick, topped with a dome of tiles over the body of bells.

The Ermita de San Isidro Labrador is located in the Plaza de la Vendimia, a few metres from the Casas Colgantes de Cómpeta.

San Isidro is the patron saint of the world’s farmers. He was born in Madrid. His parents were extremely poor peasants who could not even send their son to school.

Orphaned at the age of 10, he was employed as a labourer in the countryside, where he spent many years of his existence tilling the land, cultivating and harvesting.

He married a simple peasant woman who also became a saint and is now called Santa María de la Cabeza. He died in 1130, and the Pope canonized him in 1622.

Cómpeta is the land of peasants, and this chapel is a reflection of the devotion to it. 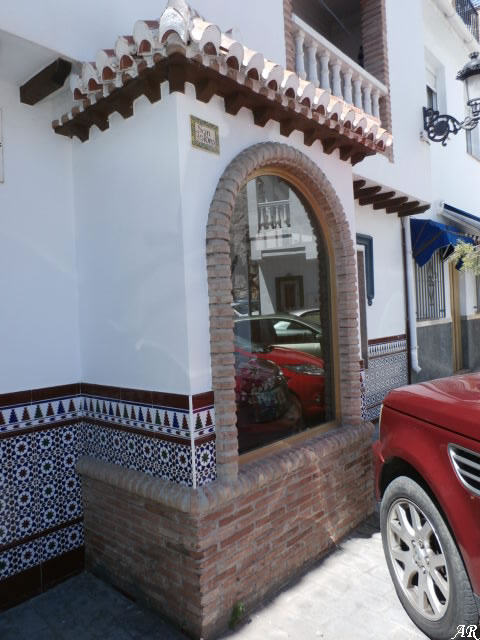 Hermitage built in the 18th century of simple construction. In it is the Patron of the animals San Antón and according to Madoz’s dictionary.

This hermitage was far from that of San Sebastián 100 varas and was so poor that in 1799 it was only required to pay one maravedí to the Real Subsidio.

According to legend, Saint Anton Abad, in the midst of the austere life he led, discovered wisdom and divine love through observing nature.

From this revelation, he acquired the custom of blessing animals and plants. From his death, San Anton Abad was taken as protector of domestic animals.

That is why this celebration tries to remember the balance that must exist between man and nature; in this specific case, with animals and plants.

Typical dishes in the gastronomy of the municipality of Cómpeta are: the fennel stew, the migas, the loin with garlic, the choto, the asadura a lo pastoril and the potajes de vigil.

It is also worth mentioning its wines, its varieties of muscatel, semi-sweet and dry.

Cómpeta, a city that wants to participate in the competition for state beauty!

As every year, cities prepare to stand out for the beauty of their citizens, this is also the case of Cómpeta, which opts for Roberto García for the position of Míster Cómpeta, thus wanting to reach its place in Malaga 2019.

How to solve your transfer to Competa from Malaga Airport?

If you need to get a transfer to Competa from Malaga Airport, we are the perfect solution, you can use our services, book our cars and get to the airport in time for your flight.

We hope that his post helped you out to enjoy your time in Competa and the surroundings of Málaga. 🙂