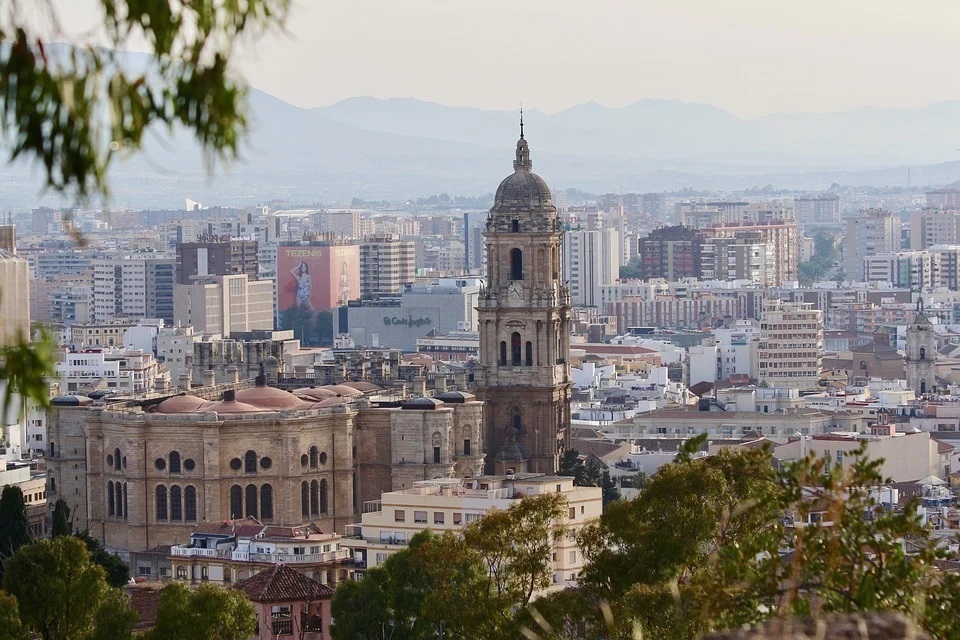 Discover what to do in Malaga City with the Malaga Cabbie Travel Guide, and the best service in transfer to Malaga Airport.

First of all Malaga is a city and municipality in Spain. It is also the capital of the province of the same name and of the region of the Costa del Sol. It is the second most populated city in Andalusia, after Seville.

In addition, it is the most densely populated urban area of the conurbation formed by the group of towns that are located along 160 km of the Costa del Sol. And it is also the centre of a metropolitan area that goes beyond its municipal boundaries and includes another 12 municipalities with a total of 987,813 registered inhabitants. It is estimated that Malaga is the fifth largest metropolitan area in Spain.

It is on the western end of the Mediterranean Sea in the south of the Iberian Peninsula. Approximately 100 km east of the Strait of Gibraltar.

Moreover, its municipal district covers an area of 398.25 km². Which occupy from the Montes de Málaga to the Guadalhorce River Valley.

It must also be said that the city is in the centre of a bay surrounded by mountain ranges. Two rivers, the Guadalmedina and the Guadalhorce, cross it and flow into the Mediterranean.

The city has a long history, because the Phoenicians founded Malaga in the 8th century BC. That is why it is one of the oldest cities in Europe.

During the 19th century the city experienced a remarkable industrial and revolutionary activity. That is why it was the first industrial city in Spain. And it won the titles of “Always brave” and “The first in the danger of freedom”.

It was also the scene of one of the bloodiest episodes of the Spanish Civil War. And finally, it was the protagonist of the explosion of the tourist boom in the 1960s and 1970s.

So don’t miss out on a holiday in Malaga. 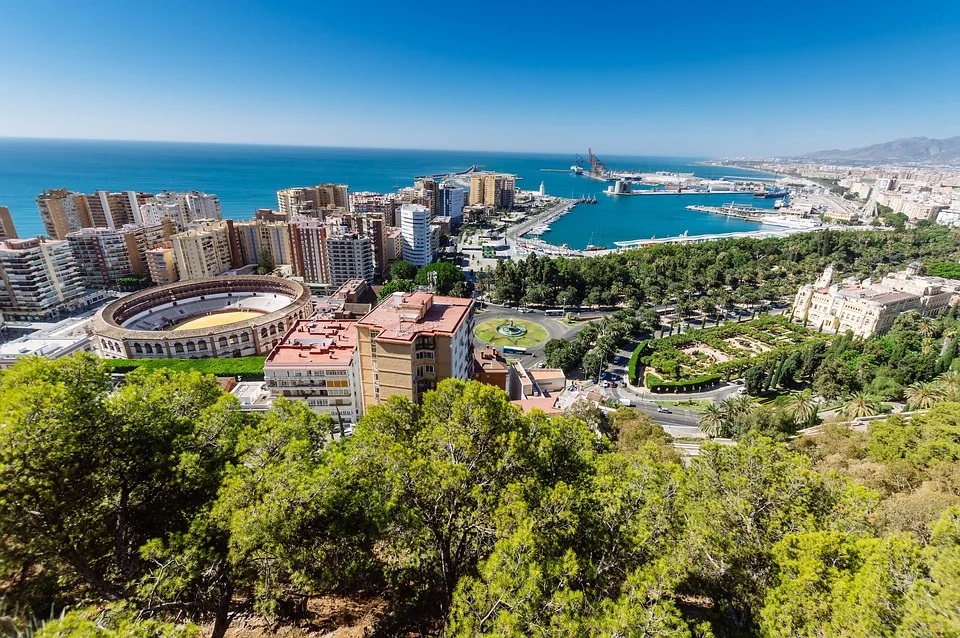 The history of Malaga

In the place where the city is settled there was a bastic settlement. On which the Phoenicians founded the colony of Malaka. Then there was a period of Carthaginian domination. Until the Romans arrived. In the Roman period the city reached a remarkable development.

The Roman decline gave way to the domination of the Germanic peoples. At the beginning of the 5th century, they destroyed the coast of Málaga. But later the Byzantine Emperor Justinian I reconquered it with the intention of rebuilding the Roman Empire.

After the Muslim conquest it became a flourishing city. It was also surrounded by a walled enclosure next to which the merchant quarters were located.

Malaga became the capital of the Hammudi Taifa. From this period there are traces in the historical centre and in two of its main monuments:

The siege of the city was one of the longest during the Reconquest of Spain. It lasted six months and cut off the food supply. The inhabitants therefore suffered slavery or the death penalty. Also in the siege of the city, they tried to assassinate Queen Isabella. Finally the capture of Malaga was on August 19, 1487, by the Catholic Kings.

Under the Castilian influence, the city began to change its urban layout and started the construction of the Cathedral of Málaga. The “Manquita” because it lacks a tower.

During the 16th and 18th centuries it suffered the consequences of the Moorish uprising and their subsequent expulsion. And also several epidemics and floods caused by the Guadalmedina River. In addition to bad harvests.

The Civitates considered Malaga an emporium of wealth. Because it is in a privileged commercial enclave. Besides its magnificent agricultural products, especially the wines and the exquisite raisins. Also its glazed vessels attracted a large influx of foreign merchants of different nationalities;

Also with the loss of Gibraltar in 1704 to the British, Malaga became the key to the Straits.

Malaga was the seat of the Captaincy General of the Coast and Kingdom of Granada. For this reason it was essential in the foreign policy of the Bourbons. The navies, the supply of the North African prisons and the defence of the Mediterranean were organised in the city.

In addition, at the end of the 18th century they would solve the chronic water supply problems that Malaga suffered. Thanks to the construction of the San Telmo Aqueduct.

In the first years of the century, Malaga would play a very important role in the War of Independence. Because it contributed with many soldiers and volunteers to the defeat of Napoleon in the battle of Bailén.

But in 1810 again Napoleon’s army entered the South of Spain. The city was occupied until 1812 and had to pay large contributions because it was the only southern capital that rebelled against the invaders.

It was also a pioneer city in Spain with the beginning of the Industrial Revolution. The mercantile activities also had an important increase and from 1860 to 1865 the communications had a great revolution.

With the renunciation of the throne of Amadeo of Savoy there were great riots and the Canton of Malaga was declared.

The decline of the city began in 1880. The crisis led to the closure of the foundries and the collapse of the sugar industry. In addition there was a plague that destroyed all the vines. The abandonment of these estates brought with it a heavy deforestation of the slopes. This was the cause of an increase in the floods of water. Which caused many disasters and deaths until well into the 20th century.

The beginning of the 20th century is a period of economic readjustment. In which a progressive industrial dismantling takes place. This led to a society that was left behind and illiterate.

In 1931, with the Second Republic, Malaga was the city that suffered most from the events caused by the anticlericals and left-wing extremists. During this time Malaga was called Malaga the Red.

After the outbreak of the Civil War, the city remained under Republican control until early 1937. The subsequent repression was one of the harshest and cruelest of the war.

During the Dictatorship, Malaga experienced a strong demographic expansion, caused by immigration from different parts of the province to the capital. But also economic expansion, thanks to the tourism boom on the Costa del Sol. There were also migratory flows to other areas of Spain and Central Europe.

From 1978 with the end of the dictatorship and the arrival of democracy. Malaga arrives at the 21st century as a remarkable cultural and economic centre. Being the city with more economic activity of all Andalusia.

The most interesting places to visit in Malaga

The Alcazaba of Malaga

The Alcazaba of Málaga is a fortified enclosure with several buildings. It was built by the Muslims in the 11th century, even though the area was previously occupied by the Phoenicians.

Many villages have passed through Malaga since ancient times. That is why in this monument we can see the remains of all of them.

This is the tourist place par excellence of Malaga. Because besides the best views of the whole city you can find here.

The origins of the castle are from the Phoenician period, when the lighthouse already existed. But the fortification was made by the Arabs in the 14th century in order to have a defensive framework that could protect the Alcazaba in case of battle.

In 1951 the Roman Theatre of Malaga was discovered by chance. An authentic theatre from the Roman period that has been used as such since its discovery.

First of all, the cathedral of Malaga is called Santa Iglesia Catedral Basílica de la Encarnación.

It is in the Plaza del Obispo, is one of the most important jewels of Renaissance architecture in Spain.

The Cathedral took more than 100 years to build. It has some traces of Gothic style, although the main style is Renaissance. It even has some baroque details. And it is called “La Manquita” because it was never finished, and it lacks a tower.

The Plaza de la Constitución is one of the most famous places in the city of Malaga. Because it was the main square since the Nasrid era.

In this square was the Town Hall (until 1869), the Casa del Corregidor, the prison and the Audience.

It’s one of the main ones in the city centre. It also has the obelisk in homage to General Torrijos and the house where Pablo Picasso was born.

The General Riego lived in the square during the 19th century, at which time it became a place of entertainment for the bourgeoisie.

It is a pedestrian street, which is one of the nerve centres of the city. It is also the fifth most expensive shopping street in Spain.

During Christmas it has a spectacular decoration.

The Mercado Central de Atarazanas is a municipal market. It is also a point of tourist interest. Because the building is the work of the architect Joaquin de Rucoba and dates from the nineteenth century.

The Malaga Festival is an annual film showcase held in Malaga, usually in the spring.

During the celebration of the festival the most relevant premieres of the year of the Spanish cinema are projected, including also the documentaries and the short films.

It also awards prizes for the best films of the year and other prizes. The main trophy is the Golden Biznaga for the Best Film. And there are also several award categories, Biznaga to the director, actor and main actress .

The first festival was held from March 9 to 17, 1998. The guest of honor was Fernando Fernán Gómez.

The Malaga Festival shows unreleased Spanish cinema in feature films, short films and documentaries, with significant events such as:

In addition, the Festival has consolidated itself as the main platform and event of the Spanish film industry. That is why every year it receives wide media coverage, both national and international.

Other film festivals that take place in Malaga are:

BOOK YOUR TRANSFER TO MALAGA HERE!

You can book your transfer to Malaga in the link bellow, also you can get more information regarding the city and what to do.