Searching a transfer to Mijas from Malaga Airport? | Contact our services 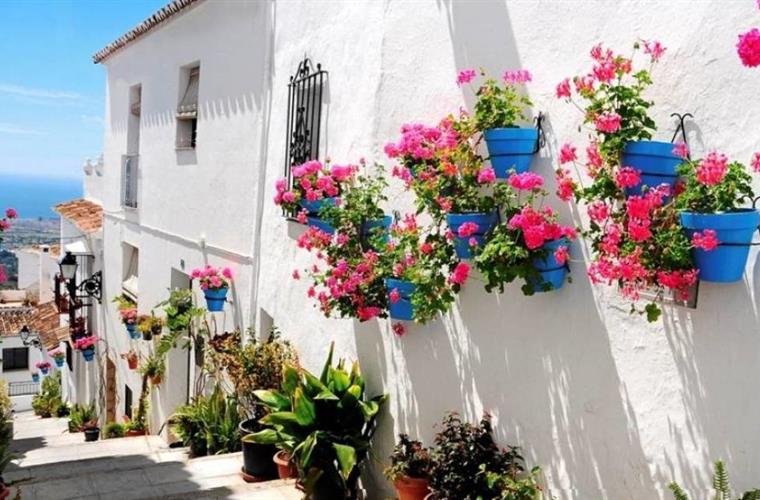 When you reach the place you are staying for holidays, your family and you won’t like to be worried about how to enjoy and discover the way to reach your hotel. That’s why a transfer to Mijas from Malaga Airport can be really helpful.

Stepping inside of your transfer to Mijas from Malaga Airport? Let’s talk about history first

The origin of this village dates back to remote times, as can be seen from the various remains found both on the hill where the parish church stands and in other nearby places.

Already in Roman times the village was known by the name of Tarnisa or Tarmina. Then it must have been a prosperous place, especially if you consider its proximity to the road that linked Malaga with Cadiz.

Mijas was conquered by the Arabs at a very early date, specifically in 714, by Abdalaziz, son of Muza, thanks to a pact they made with the Hispano-Gothic settlers.

It was precisely the Arabs who contracted the Roman name of Tarmina and turned it into “Mixa”, a term that, in Spanish, remained in Mijas.

During the Muladí rebellion led by Omar Ben Hafsun (late tenth and early eleventh centuries), Mijas belonged successively to the emirate and the followers of the rebel.

It was reconquered, after the seizure of Málaga, by the Christian troops in 1487, just before the fall of the Nasrid kingdom.

During the subsequent struggle, Mijas became General Captaincy. The Christians who came from the north to repopulate the area joined a large part of the Muslim population who preferred to remain there, despite the defeat.

Faithful to Juana “La Loca” in the war of the Communities, Mijas received from the sovereign the title of Villa in 1512, together with an even more precious prize: he was free of the payment of alcabalas.

Later, the Crown granted him another honour: that of the consideration of Muy Leal.

Mijas is one of the largest municipalities in the province of Málaga, with a little more than 147 square kilometres stretching from the mountain range from which it takes its name to the very shores of the Mediterranean, which bathes it for more than 14 kilometres.

This coast also keeps traces of the past, such as the Calahonda, Calaburra, La Nueva and La Vieja towers in Cala del Moral…

Mijas Pueblo is situated on the slope of the mountain range, some 428 metres above sea level, which has allowed it to have a privileged position for the defence of the area in previous times.

Its climate and situation have made of Mijas a tourist place par excellence in which, in addition, many foreigners have fixed their residence (foreigners of more than 78 nationalities are counted).

But they are not the only causes. History has left a museum distributed throughout its streets: the remains of the Arab wall that served as a fortress and was destroyed in the Reconquest; the bell tower of the church of the Immaculate Conception; the hermitage of Calvary…

Anyway, to get to know Mijas you have to walk through “El Barrio”. It is the oldest part of the town and the place where the essence of white Andalusia is preserved, whitewashed and adorned with grilles and flowers.

A district in which some houses have wanted to join nature, taking advantage of the shape of some caves to integrate them into their homes and form part of them. 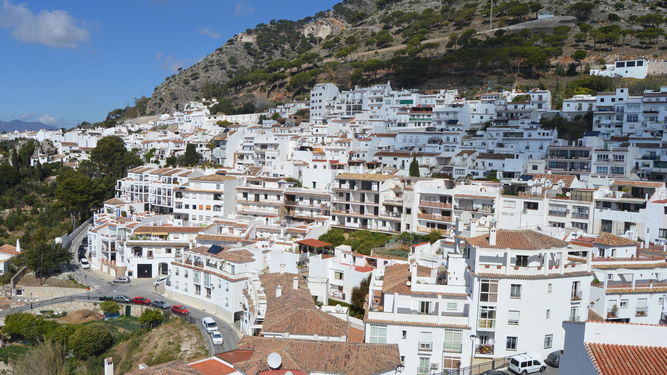 But it is also necessary to know its places, such as the Sierra de Mijas, a true paradise of Nature where, according to legend, the Virgin Mary appeared to the shepherds Juan and Asunción.

To commemorate it, and inside a large rock, a small sanctuary known as Virgen de la Peña was built. In this hermitage is kept the image of the patron saint, carved in wood back in the year 850.

This same place, also called El Compás, has one of the most spectacular viewpoints of the town having the privilege of not only contemplating the beautiful landscape from there but, at a glance, we can admire the entire coast.

Typical of Mijas are its already famous “donkeys-taxis”, typical stamp that, this nice transport, makes the route half attractive half folkloric.

And so we can get to know the square of the “Siete Caños” (Seven Spouts) as it was reached by the water of the Sierra that flowed through those seven spouts, which is another small piece of the history of this village.

Or reach the Plaza de la Libertad, where the Town Hall used to be and which is now a Popular Museum in which not only the old instruments of livestock, agricultural or fishing activities are exhibited, but it is also used to exhibit the artisan and current creations of the Mijeños.

In it we will find a very special room dedicated to the last Republican mayor, Manuel Cortés, known as “the mole of Mijas” since he was hidden in that house more than 30 years after fighting against the national troops.

But the local economy is not only based on tourism. There is also the fishing activity which, curiously, also contributes to tourism as a leisure activity. 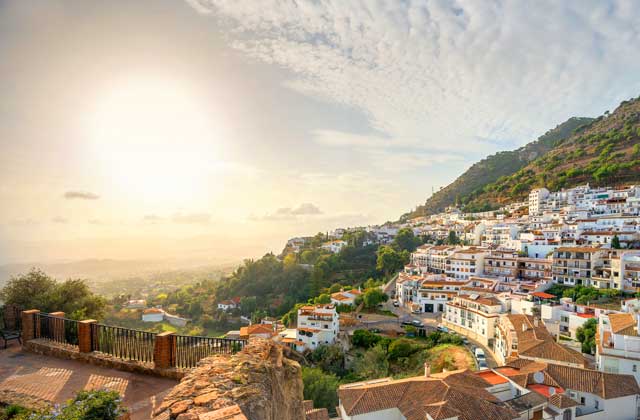 The hermitage of the Virgen de la Peña

From the viewpoint near the hermitage, you can see a large part of the Mediterranean coast, including the African coast on clear days.

The viewpoint and gardens of the Wall

These beautiful gardens are the remains of the ancient fortress built in the Muslim era. At present they offer a pleasant walk, with a gorge where climbing is practiced and several viewpoints.

From the gardens you can see Gibraltar and the coast of Africa on clear days. The parish church of the Immaculate Conception is also located there.

The church was built next to the 16th century bell tower and served as a refuge for the residents in the event of an attack.

The bullring of Mijas

In the gardens of the Muralla, tourists can visit the bullring of Mijas, characterized by its distinctive oval shape, with bullfights every weekend in high season. It was built in 1900 on the site of the former castle.

Right next to the museum of miniatures of Mijas, we find a recreation of a flour mill with its original machinery. In the past, Mijas had more than 22 flour mills but, unfortunately, very few have survived to this day. 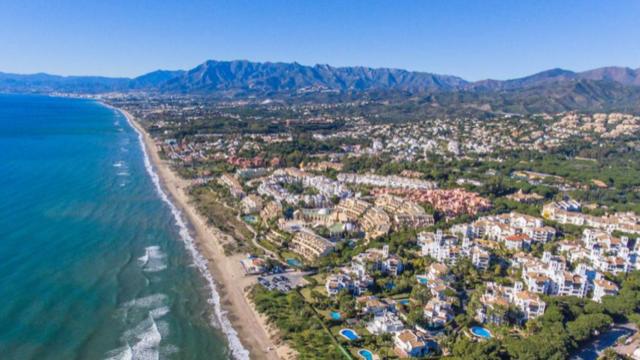 Take your transfer to Mijas from Málaga Airport to the beach!

Cala de Mijas is the most popular cove of all and is located precisely in the town of the same name. Around it there are many bars and restaurants because it is a very tourist place that is always crowded, making it ideal for business.

As if this were not enough, the beach in this area is awarded the Blue Flag of the European Community, so you can get an idea of the beauty of the place and the good conditions of its sand and water.

This beach is located in Calahonda, it is a different beach from all the others. It’s got dark sand and that’s what’s going to get your attention the most.

But it is a great beach to spend the day with family, friends or alone. It also has a blue flag thanks to the many services available to make your day at the beach special and you do not lack anything.

In Cala de Mijas you can also find El Bombo Beach, a famous beach although not as well known as others. It has four restaurants near the beach and if you forget the towel or the deckchair, you can also find them there so you can rent the umbrella or deckchair you prefer.

It is a way to avoid having to carry the sun loungers and umbrellas from home.

Although in high season you risk that when you arrive everything will be taken and you will have to go back to your house to take it or go to the store and buy what you need for the beach. 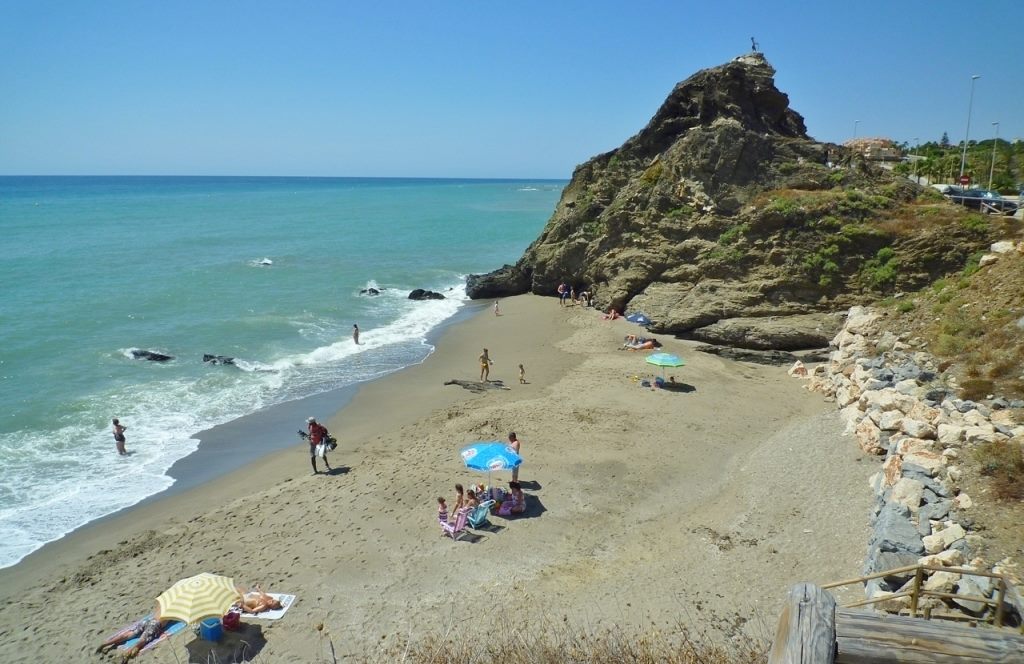 It is a beach where you can find many apartments for rent so that you can stay.

It’s a great idea to spend the summer on the beach and also have the beach close by every day. However, book in advance because the apartments are full in high season, and the cost can be somewhat high.

El Almirante beach is also located in Calahonda and is also a beach of dark sand. It is a beach to enjoy the fresh air, the sea and good views.

It will undoubtedly be a place where you can relax and rest. You will also have services to make your day perfect.

This beach is very similar to the previous one in terms of services and is very popular with the people who live in this town. That’s why if you want to get to her you won’t have any problem. 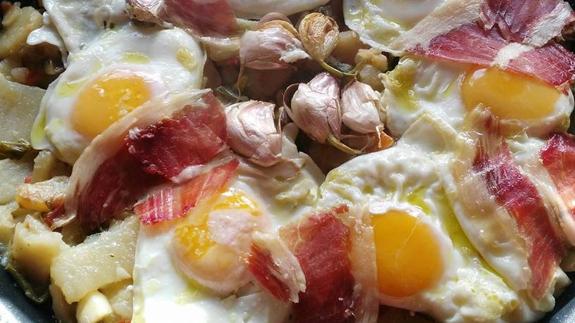 What you would eat after getting your transfer to Mijas from Malaga Airport!

In the gastronomic aspect, apart from the many international restaurants that exist, the cuisine of Mijas is based above all on the rich and varied first courses, for its great variety.

Its location on the coast and in the village allows the traveller to enjoy a cuisine based on fish as well as the typical dishes of the local cuisine:

How to solve your transfer to Mijas from Malaga Airport?

If you need to get a transfer to Mijas from Malaga Airport, we are the perfect solution, you can use our services, book our cars and get to the airport in time for your flight.

We hope that his post helped you out to enjoy your time in Mijas and the surroundings of Málaga. 🙂