Searching for a transfer to Salobreña from Malaga Airport? 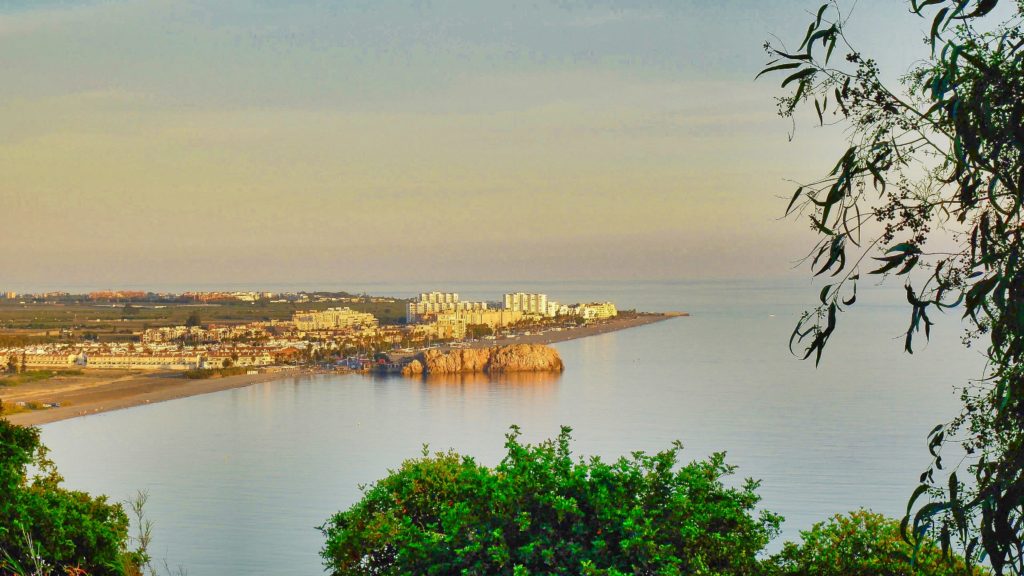 Arriving in an unknown city is a magical feeling of adventure that will invade you when you arrive with your transfer to Salobrena from Malaga Airport.

That’s why we want to give you the best possible experience and we do it through our service and this magnificent guide to the city you are going to explore.

Thinking about your transfer to Salobreña from Malaga Airport? Let’s talk about history first

The oldest documented occupation, in Salobrena, dates back to the Neolithic about 6,000 years ago, when groups of semi-nomadic shepherds frequented the area, leaving behind remains of their material culture in the “Cueva del Capitán”.

At that time the Rock of Salobrena was an island.

To understand this last fact, as well as much of the history of this village, we must highlight the importance of the Guadalfeo River in the modelling of its surroundings.

It is in the third millennium BC that an important cultural change took place with the appearance of copper metallurgy, megalithism and the appearance of stable settlements located on rocky promontories of easy defence, with an economy based essentially on agriculture and livestock.

In the 8th century B.C., the Phoenicians arrived on the Andalusian coast in search of metals, founding a series of factory colonies from which they traded with the indigenous populations.

Here they founded a small factory, the “Selambina” of the classical sources, which will be dedicated above all to fishing activity.

From VI BC onwards, Selambina came under the influence of Carthage and joined the “Punic League of the Strait”, commanded by the city of Gadir (now Cadiz).

The occupation of Salobreña by the Romans, from the 2nd century B.C., is early and intense, as remains of this culture have been found practically all over the municipality.

The promontory of Salobrena presented unbeatable conditions for a settlement, based on its strategic position in front of the sea.

The definitive rupture with Rome, will come starred by the Muslim invasion of the Iberian Peninsula, so in the year 713 the territory of Elvira, fell into the hands of Muza’s troops, at this time we still have no direct news about Salobreña.

During the following centuries, Salobreña must have acquired more and more importance in the coastal territory of Elvira.

In the Nasrid period, the 14th century, Salobrena can be considered as a Madina, or completely formed city that would play the main role as an organizing element of the settlement, with a series of farmsteads depending on it, among which Vélez de Benaudalla, Molvízar, Lobres, etc., stand out.

The end of the Muslim Salobreña was in 1.489, when after the fall of Baza and Almería, the entire coast of Granada, under the control of El Zagal, became part of Castilian rule.

The intervention of Francisco Ramírez of Madrid in the conquest of Salobrena was undoubtedly decisive, in prize of which the Catholic Monarchs named him the warden of their fortress.

The rebellion of the city’s inhabitants in favour of Boabdil in 1490 marked the process of occupation of the area by the Castilians.

The Muslims of the farmsteads remained in their places, while the city will now be occupied entirely by the Castilians, remaining practically depopulated for a long time.

The definitive expulsion of the Muslim population took place with the rebellion of the Moors of Granada at Christmas in 1568, in the Alpujarra.

The Moors of the area of Salobrena would also rise up in arms so that in February 1569 the Marquis of Mondéjar had to intervene to subdue them.

The Contemporary Age opened in our lands with a deep-seated warlike conflict: the War of Independence, between 1812 and 1814, Salobreña was integrated into the departure from the coast, commanded by the mayor of Otivar, Juan Fernández Caridad, who would tirelessly harass the French troops that occupied the area.

The 19th century will see a new resurgence of sugar cane cultivation and industry.

We reach the twentieth century, when the loss of the military character of Salobreña and the resurgence of the sugar industry led to the extension of the urban perimeter of the town, forcing the demolition of the remains of the walls.

Already in the 50s and 60s, urban expansion took place towards the Cañada. It was not until the 70s and 80s, when the town centre expanded into the meadows adjacent to the rock.

The tourist boom of the 1960s did not have an impact on Salobrena as it did on other areas, although in 1964 it was declared an area of national tourist interest, and it was in the 1980s that it took off.

Today, Salobreña is a town that has its sights set on tourism for its future development, which has seen its urban fabric increase spectacularly in the last decade, with a population of over 10,000 inhabitants.

Seeing the important places in the city is very relevant for your vacation. So while you’re on your transfer to Salobrena from Malaga Airport, decide which sites you’ll be visiting and taking the most out of.

The Moorish Castle of Salobreña

Located at the top of the rocky promontory, due to its strategic location and its importance in the history of the town, it is a landmark par excellence. From its towers, the panoramic view is really impressive: the blue sea confused in the horizon with the sky, the green meadow interrupted abruptly by a mountainous amphitheatre and the snow-capped peaks of Sierra Nevada in the winter.

Since the 10th century, Arab sources tell us about the existence of a fortress in the area, but nothing is said about its dependencies. For ten centuries it has been the object of continuous and profound transformations so that an evolutionary analysis of it encounters serious difficulties due to its structural complexity.

The historic centre is made up of neighbourhoods built inside the former Wall that in the Middle Ages fortified the city and made it one of the most impregnable places on the coast of Al-Andalus. Among its most interesting monuments and sites are the Moorish Castle, the Mudejar Church of the Rosary, the Vault, the Paseo de las Flores, the Postigo Viewpoints, the Frascunda and the Albaycin.

Built over the Muslim mosque, the church is in the Mudejar style (16th century). The original roof was made up of a wooden coffered ceiling that was burned in 1821.

Then its interior was clad and restored. The headboard dedicated to the Main Altar has access to the tower and the sacristy.

On the feet is the raised choir supported by a simple frame of wooden beams. Its side door stands out, decorated with tiles and the tower, slender and finished off with staggered battlements typically Mudejar.

From the imagery we can highlight the image of the Virgin of the Rosary, (16th century). The church square was a Christian cemetery until 1789.

The first inhabitants of the rock (3000-2000 B.C.) settled on this slope. Built in the 70s, the promenade enjoys a privileged setting.

Surrounded by gardens, with different species of shrubs, flowers and palm trees, it allows you to contemplate the hillside of the mountains, the valley and the plain, with its cane and subtropical plantations.

It is a beautiful medieval vaulted passage that connected the Albaycin district with the nucleus of the old Medina, the centre of commercial activity.

The side access is the only gateway to the walled city, which is still standing. It was mainly used for goods receipt.

Another three access gates to the interior of the wall and located in their respective towers, today disappeared were the Puerta de la Villa, Postigo de Poniente and Postigo del Mar.

The vault is approximately semicircular barrel vault. It rests externally on a section of the old wall of the town.

We do not know the date of its construction but it seems that it was built in the 16th century due to the need for space to build the Church of Our Lady of the Rosary and its respective atrium.

What you would eat after getting your transfer to Salobreña from Málaga Airport!

Food is a very important part of your trip, so knowing a little about the style and culture of the place is essential.

While you’re on your transfer to Salobrena from Malaga Airport, you can think about the delicious dishes you’re about to try.

In Salobreña it is almost impossible not to eat well. Salobreñera’s gastronomy is based on three essential pillars: the sea, the plain and the local people.

Dogfish stews with potatoes, seafood soups, homemade dishes such as breadcrumbs or flour deserve to be tasted by our visitors.

Gazpachos with vegetables from the garden and tropical salads with exotic fruits produced in Salobrena.

The confectionery of Arab origin and ice creams such as locally produced curly milk, custard apple ice cream, desserts and semi-fried tropical fruits are delicious to the palate.

Tapear in Salobrena, between its streets and squares, is to taste the popular and traditional cuisine, fried or grilled fish, portions of different homemade dishes, cold meats, meat or fish with olive oil and tomato, accompanied by the wines of the land, are a uniqueness of the region.

Salobrena, in the heart of the Costa Tropical of Granada, has a Mediterranean and subtropical climate.

Thanks to the sea and the proximity of the Sierra Nevada, autumns are usually hot and springs are mild. 320 days of sunshine a year and pleasant temperatures, both in summer and winter, allow you to enjoy an excellent holiday in the sun.

The annual average temperature is 18-20°C and the rainfall, which does not exceed 500 mm/year, makes the Costa Tropical the only place in Europe where tropical fruits such as custard apple and others such as mango and avocado are grown.

To enjoy Salobrena is to enjoy a place in Europe where winter does not exist.

How to solve your transfer to Salobreña from Malaga Airport?

If you need to get a transfer to Salobreña from Malaga Airport, we are the perfect solution, you can use our services, book our cars and get to the airport in time for your flight.

We hope that his post helped you out to enjoy your time in Salobreña and the surroundings of Málaga. 🙂