Are you searching for a transfer to Sayalonga 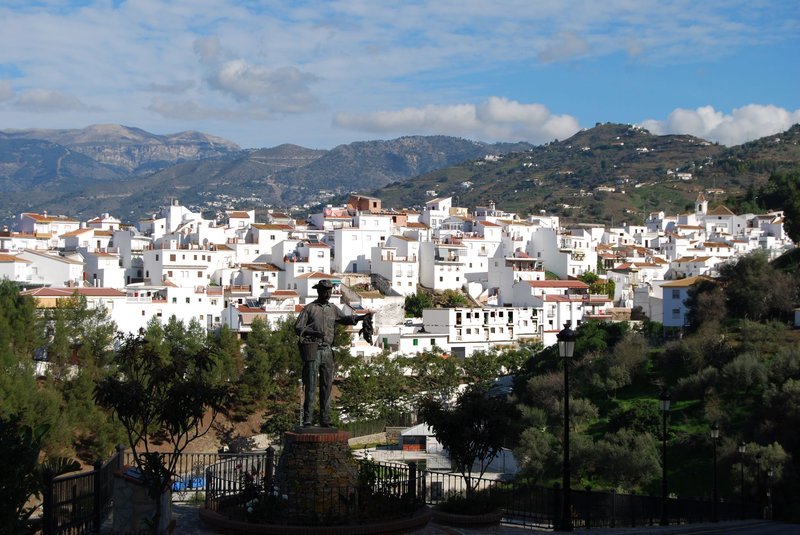 If you have just arrived for your holiday and need a way to find your hotel or residence, don’t worry, with our city guide and your transfer to Sayalonga from Malaga Airport-.

Stepping inside of your transfer to Sayalonga. Let’s talk about history first

From the historical point of view, the origin of this municipality is confusing, although its foundation is attributed to the Arabs, since no remains of other villages have been found that preceded it.

What seems clearer is the Latin etymology of the name: Saya-Longa, which means “long tunic”.

To the west of the village we find the hill of La Rábita de Sayalonga and near it, the settlement of Batahis (Batarxis), currently uninhabited.

La Rábita was a sanctuary or convent of warrior monks who had to be introduced by the Arabs from the eleventh century onwards and from whom they kept the region defended.

The nucleus of Batahis originated at the beginning of the fourteenth century, according to the poet Alí Ibn Ahmd Ibn Muhammad Al-Hasní, a composer famous for his stories of the city of Santa Meca and of the rulers of Muslim Málaga.

It seems that this poet was born there.

When the Catholic Monarchs took Vélez-Málaga, Sayalonga’s surrender followed the example of the other villages in the region.

Shortly afterwards, the municipality of Sayalonga was relegated to a secondary position, and its inhabitants joined the rebellion of the Moors, and were later expelled by the Christians.

The battle of Frigiliana in 1569 seems to be the decisive date of the defeat of its neighbours. 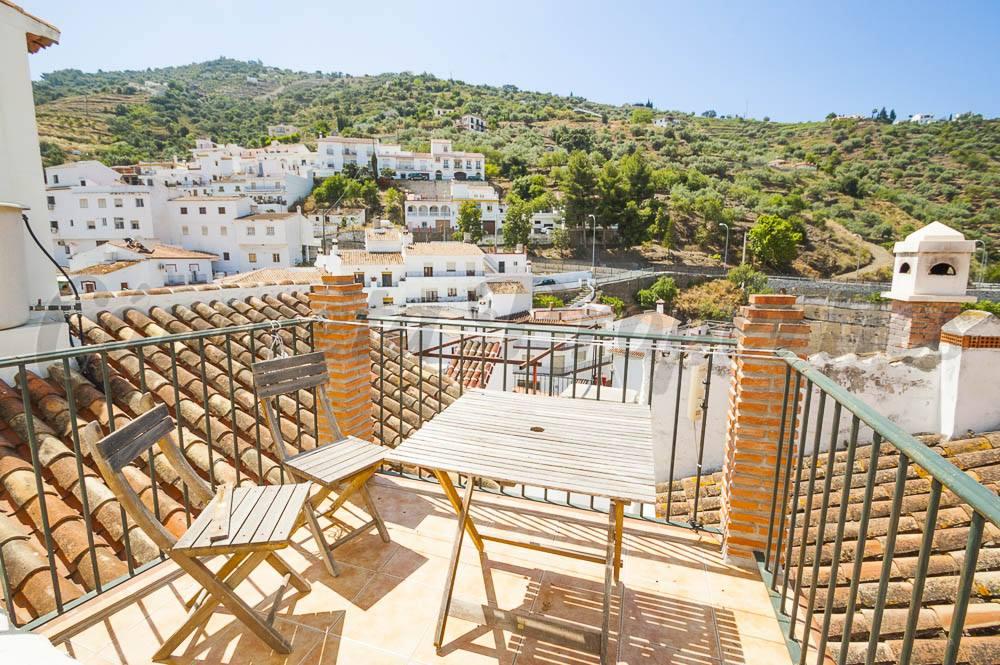 The name of the Loma de Matamoros, which exists on the Rábita road, dates from this period, as well as the Moorish tombs found in the surrounding area.

Felipe Segundo promulgated in 1571 a royal decree by which all the assets of the Moors are confiscated for later delivery to the old Christians who came to the area from various parts of Spain.

These new settlers maintained the typical agriculture of terraces which is still practiced in Sayalonga.

The urban layout is, as could not be otherwise, the typical Arab, narrow streets and white houses.

Walking through the village you will find the sixteenth-century church of Santa Catalina and, above all, the curious circular cemetery.

The largest population centre, apart from Sayalonga itself, is Corumbela, although it is true that there are numerous cortijadas scattered throughout the municipal district where more and more foreigners are living.

The geographical circumstances of Sayalonga are those that have determined its own existence: on one side La Rábita, which is a mountain of hard and slate rock on which the village sits; and on the other, the river Céjula, essential for ortolan fertility.

The name of this river has caused an occasional enmity between Sayalonga himself and his neighbour Algarrobo, to the extent that each of them recognises the river with the name of their municipality.

The agriculture is the Mediterranean itself: olive trees, almond trees and vineyards, being the main sustenance of the local economy.

In any case, this Mediterranean climate has allowed agricultural activity to be redirected towards fruits of tropical origin, such as medlars, cherimoya, avocado, persimmons, mangoes…

Their production being increasingly important and gradually displacing olive trees and vineyards. 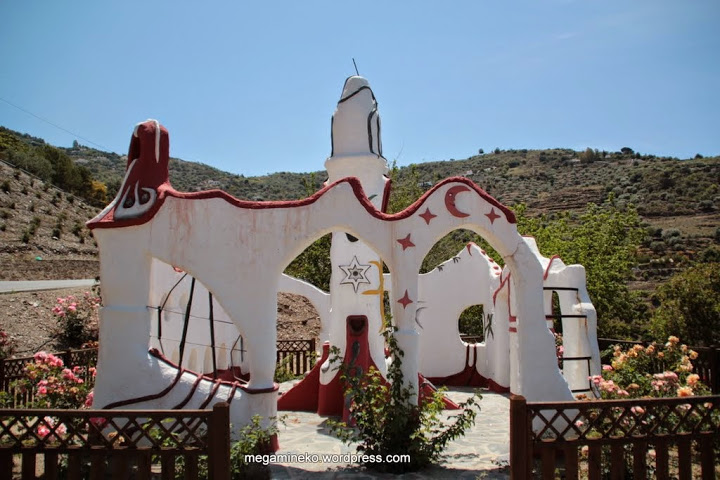 But how would be the weather when you take your cheap car hire in Sayalonga?

The climate is warm and temperate in Sayalonga. In winter there is much more rain in Sayalonga than in summer. According to Köppen and Geiger climate is classified as Csa.

The average annual temperature in Sayalonga is 16.6 °C. There is about rainfall of 444 mm.

The driest month is July, with 3 mm. 69 mm, while the average fall in November. The month in which it has the highest rainfall of the year.

Monuments to visit when you get your transfer to Sayalonga

This church was built in the sixteenth century on what had been the Old Mosque, and probably in the same place where a Roman temple was located. Its style is Mudejar highlighting its octagonal tower similar others of the Province of Malaga.

The sculpture of the Virgin of the Rosary, which dates from the 18th century of the Granadina school, stands out for its great sculptural value.

It is located in the historic centre of the village, in Plaza de la Constitución.

The hermitage of San Cayetano was probably built in the 16th century.

It was dedicated to Christian worship in times of cohabitation of the Christian and Muslim religion; or perhaps it could have been dedicated to the invocation of some other saint.

It currently contains the image of San Cayetano, an image from the 18th century and of great sculptural value.

It can be found next to the entrance door of the Santa Catalina Church.

It is probably one of the only round cemeteries in Spain and stands out for its popular architecture, being one of the most visited monuments in the Axarquia with more than 3,000 visitors a year.

Just at the entrance to the cemetery is the Interpretation Centre, that will explain to visitors that they can be found in it and the origin of its construction.

To go to the Redondo Cemetery follow the indications that you will find throughout the village.

To visit the Interpretation Centre you can ask for the key at the Tourist Office as it is closed for security reasons.

This alley is one of the narrowest in the Axarquía. With only 55cm at its narrowest part, and its funnel shape gives it its name, ALCUZA, in Arabic.

It lies between one of the many narrow streets that cross the Plaza de la Cosntitución, next to the Tourist Office or the entrance to the church door.

The firm has recently been reformed with exposed stones to give an even more characteristic appearance.

Every visitor who passes through it will be able to feel “full” the atmosphere of old times ancestors. 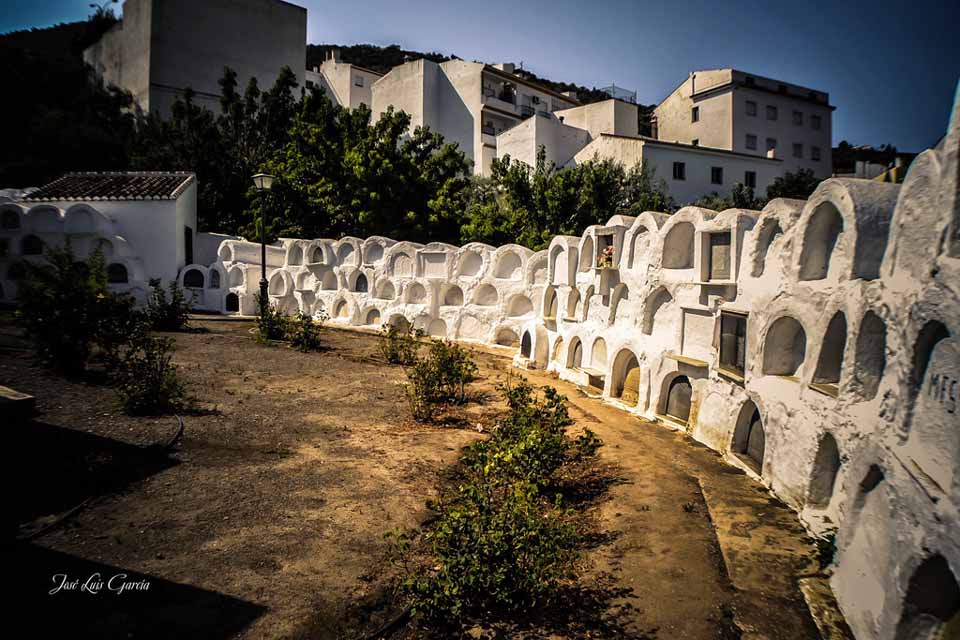 Built last year 2002, this viewpoint on the outskirts of the village towards Competa offers visitors panoramic and splendid views of all the villages and mountains in the area in general.

It is located on the Redondo Cemetery of Sayalonga and offers open views towards the Sierra Almijara, Corumbela, the Monte Bentomiz, views to the villages of Archez and Canillas at the foot of the Sierra.

And views, of course, to the Redondo Cemetery, to Sayalonga, and to the Santa Catalina Church.

This fountain has been the main supply of drinking water of the population in times of the Arabs being therefore its construction at this time.

Legend has it that the Cid Campeador drank water from this fountain during one of his visits to the area.

Of the oil that comes from the olive trees that are on this source the oil is extracted that will burn the candles of Our Lady of the Rosary in her Holy Day the 7 of October.

The most typical products of Sayalonga are in addition to the famous nisperos on those who make parties, handcrafted wine, raisins and almonds.

The most traditional dishes of the place are similar to others of the axarquia emphasizing the ajoblanco with grapes.

Other typical dishes of Sayalonga are:

How to solve your transfer to Sayalonga

If you need to get a transfer to Sayalonga from Malaga Airport, we are the perfect solution, you can use our services, book our cars and get to the airport in time for your flight.

We hope that his post helped you out to enjoy your time in Sayalonga and the surroundings of Málaga. 🙂