Do you need a transfer to Sotogrande | Contact us!

One of the first things you may want to solve is your transfer to Sotogrande from Málaga Airport, then you will be able to start your holidays.

So, why not to catch up with some extra information about the place you are about to visit?

Here we are to help you out 😉

Thinking about your transfer to Sotogrande. Let’s talk about history first

To enjoy your transfer to Sotogrande from Málaga Airport, we will tell you about how it became the best resort in Europe. Let’s start with it!

The creation of the Sanroqueña Urbanization of Sotogrande came about as a result of a series of circumstances happened at random in 1962.

A marketing director of the airline Swissair decided to give a few loyal customers some free airline tickets.

Among those lucky executives was Fredy Melian, an employee of the Ayala Corporation in Manila, Philippines, who decided to take the opportunity to visit Spain, the country of his ancestors.

By chance, the night before his departure, his boss at the company, Joseph McMicking, called him to entrust him with a mission: to look for land somewhere in the Mediterranean basin for the construction of an elite urbanization.

For Fredy the holidays were over, but on the other hand, there was a small step towards the creation of the world-renowned exclusive development and that in the not too distant future he would be the company’s first director.

After studying all the options with care, Joseph McMicking and his nephews Jaime and Enrique Zobel decided to buy the Paniagua Farm, located in the municipality of San Roque, very close to the Rock of Gibraltar.

The location had enough water with the nearby Guadiaro River, as well as a nearby airport in the British colony and the option of acquiring adjacent farms such as Sotogrande, Conchudo or Valderrama.

The Francoist authorities did not put obstacles to McMicking to develop Sotogrande, at a time when foreigners were still not allowed to buy land without the approval of the military.

In addition the location of the urbanization in a sensitive place militarily speaking for its proximity to the Rock of Gibraltar and Morocco, would have made presage another attitude, but fortunately, it was not the case.

Places to visit when you get your transfer to Sotogrande

If you get from your transfer to Sotogrande, sure you will want to visit the famous spots from this resort. Let us tell you about it.

Already in 1964 McMicking hired the best golf architect in the world, Robert Trent Jones and put at his disposal the entire estate to choose the perfect location for the first golf course, then project the construction of the surrounding urbanization.

The first road opened in the urbanization would become what today is Paseo del Parque, the most emblematic avenue in Sotogrande.

This access facilitated the construction of the first bungalows adjacent to the Real Club de Golf Sotogrande.

In 1965 the first polo field was built in Sotogrande, the legendary La Playa course, next to the mythical Real Club de Golf Sotogrande and the El Cucurucho Beach Club.

In 1971, the famous Sotogrande Gold Cup was played for the first time.

Since the sixties Santa María Polo Club has been gaining positions for today to be one of the three most important polo clubs in Europe, where you can play this equestrian sport 365 days a year.

It is also the only polo club in the world that holds two scoring tournaments on the international circuit every year: the Silver Cup and the Gold Cup.

This legendary hotel from the early days of our famous private urbanization, Sotogrande was inaugurated in 1965, built by Sotogrande S.A. at the orders of its founder, Joseph McMicking.

The initial project was entrusted to the renowned Madrid architect José Antonio Corrales Gutiérrez, nephew of another important architect, Gutiérrez Soto, who designed the Club House of the Sotogrande Royal Golf Club and the first bungalows of Sotogrande.

His work was declared as an Asset of Cultural Interest in the General Catalog of Andalusian Historical Heritage.

The project of a marina was drawn from the beginning of the urbanization, although it would not be until July 1987 when it was inaugurated.

In 1982, an administrative concession was requested from the State to create the Sotogrande Marina and build the first buildings and berths.

From the beginning of the Urbanization of Sotogrande, the idea of building a “Mini Venice” – a marina with artificial islands, to which end Sotogrande S.A. acquired the appropriate land on the left margin of the River Guadiaro Estuary.

At the beginning of the nineties it was decided to build a small lake city with luxury apartments on islands and banks, which is what can be seen today in the area of the Marina de Sotogrande.

What you would eat after getting your transfer to Sotogrande

Maybe you will feel like eating while you are at your transfer to Sotogrande from Málaga Airport, so here there are the restaurants that we will recommend you. 🙂

Located in Sotogrande, one of the most remarkable elements of Cortijo Los Canos Restaurant is its location in the Old Cortijo of the same name.

Its environment has been described as intimate, working with success traditional cuisine with elements of what is usually called “international cuisine.”

The Barlovento is a restaurant specializing in fish, seafood and tapas, a cuisine in the most authentic sailor style. At El Barlovento they have spent a lifetime working for good food and good drinking.

However, this does not mean that the letter does not have meat, because it offers a truly exquisite lamb.

In its offer you can highlight the seafood soup, its salad of peppers ‘asaos’, their clams chirlas with garlic, their salmonetitos and their fish with salt.

As for desserts, we recommend your profiteroles filled with ice cream with hot chocolate.

Midas restaurant, located in the marina of Sotogrande de San Roque, it is one of the most important and famous restaurants in the area.

Magnificent dishes, with fish as the protagonist, and an exquisite service endorse its reputation.

Actually, there are many who come to this place to taste some really tasty recipes, as well as enjoy your terrace Zaldia Lounge Bar.

Where in addition to spending a good afternoon, you can have a good glass of your choice of liquors and spirits until into the night.

Its careful menu maintains the balance between traditional and modern cuisine: sirloin of red tuna from the Strait, roasted suckling pig, sea bass with salt or its unique Cheeseburgers.

While you are at you transfer to Sotogrande, think about our gastronomy

The way of life and culture of its locals offer visitors a gastronomic offer full of good taste and tradition.

Although the fish and shellfish of the Gulf of Cádiz are the big winners, we can also savour tasty dishes from the land, based on beef and game meat. But … What typical dishes to eat in Cádiz? Good question.

Eating fried fish or fried Andalusian in Cádiz is a tradition of yesteryear that must be fulfilled if you visit this beautiful city.

The selection also varies in the choice of the cook.

The wild red tuna is an autochthonous fish that is found in the Cadiz coast, more specifically in the Barbate traps.

Besides that it is one of the best tuna in the world, it is very consumed among its locals and visitors for its texture, great taste and protein intake. A gastronomic gem!

The bluefin tuna tartare is raw and cut into very small pieces. It is served cold, and as added ingredients: a touch of dill, capers, spring onions, a few drops of soy sauce, sherry vinegar, salt, pepper, and a good oil with Denomination of Origin of the province.

The marinade is made with garlic, paprika, oregano, cumin, laurel, vinegar and olive oil. Later it passes through hot and abundant flour and oil, so that it is very crispy.

This fish, apart from how delicious it is, is rich in vitamins, minerals and antioxidants. Do not leave Cadiz without trying the dogfish, you will hallucinate!

The shrimp omelette, also known as tortiguillas fritas, is another of the star dishes of the traditional cuisine of Cadiz. And it is that the shrimp is a characteristic product of Cádiz.

Gastronomers from Cadiz have affirmed in research that the shrimp omelette could pass the 500 years of culinary tradition of Spanish-Italian origin. A recipe with history!

The main ingredient is chicken (breast and thigh) cut into small pieces, sherry, and garlic. Next, the pieces of marinade are drained, a frying pan is heated with plenty of oil and the chickens are submerged.

The key is that they are crisp. Of course, when you finish eating it, you’ll suck until your fingers!

The climate in Sotogrande is the Mediterranean climate, it is the mild climate of this latitude, with more than 300 days of sunshine per year, and an average temperature of 24 degrees Celsius.

The minimum in winter is usually around 8 or 9 degrees, while the maximum summers exceed 30 and sometimes 40 (rarely).

The hottest months are June and July, the rainiest November and December and the coldest January and February.

If you are a sail lover, we recommend that you come in the period from May to September.

If you want to play golf, any time of the year is good, but in spring, from April to June, it will be when you most enjoy this sport for everything that surrounds the fields.

The colourful vegetation and the pleasant temperature that you will own and finally, to play polo, in summer is when most activities take place in the Santa María Polo Club. 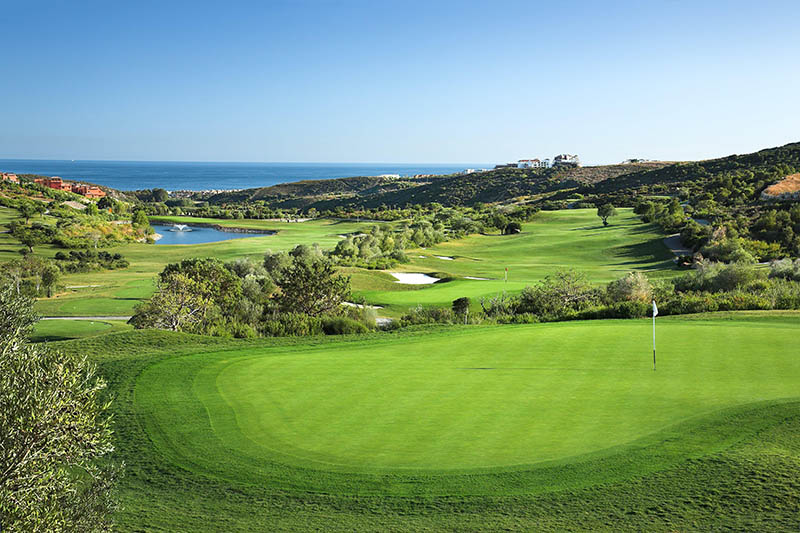 Do you like to play golf? Then this is the place to be

When you get to Sotogrande, maybe one of the things you want to do is going to enjoy the golf fields from La Reserva de Sotogrande.

Sotogrande is the home of legendary golf courses and La Reserva Club continues this historic legacy while creating a contemporary experience that defines the area today.

Carved into the hillside with natural vistas in every direction, the 18-hole championship course was designed in 2003 by American architect and course designer Cabell B. Robinson.

With wide, sweeping fairways that lead on to large greens, gentle but challenging undulations and various water features, La Reserva is a must-play for any golfer visiting Southern Spain.

Carved into the hillside with stunning vistas down to the Mediterranean Sea and up to the Andalusian hills, La Reserva’s 18-hole championship course was designed by acclaimed golf course architect Cabell B. Robinson.

Opened in 2003, with wide, sweeping fairways that lead on to large greens, gentle but challenging undulations, and a birds’ nest location high up on the escarpment.

It has fast become a must-play for any golfer visiting southern Spain  and a fitting next chapter in Sotogrande’s proud golfing legacy.

One of the most outstanding chapters in the history of golf in Spain took place in Sotogrande.

The celebration of the Ryder Cup, in Valderrama, in 1997, was legendary.

Days in which the whole world set its sights on Sotogrande to see how that European team captained by Severiano Ballesteros rose victorious.

The Magazine of Sotogrande recalls through historical images one of the most brilliant pages of the urbanization.

How to solve your transfer to Sotogrande

If you need to get a transfer to Sotogrande from Málaga Airport, we are the perfect solution, you can use our services, book our cars and get to the airport in time for your flight.

We hope that his post helped you out to enjoy your time in Ronda and the surroundings of Málaga. 🙂