Let us show you the details of transfers route from Malaga airport to La Herradura: information, interesting places and beautiful views. We also take the opportunity to thank you for book your transfer service with MalagaCabbie. 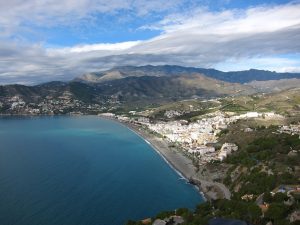 The distance from Malaga Airport to La Herradura is 85 kilometers. The chauffer of your transfer service will take about 55 minutes. Depending on traffic and weather conditions.

Currently, the A7 motorway passes through the municipality of Almuñécar, to which the town of La Herradura belongs. The section that goes from the town of Maro (which belongs to Nerja, Malaga province) to Almuñécar (Granada) was opened on 2007 and. The complexity of the terrain on which the current motorway sits as it passes through the town delayed its arrival for a long time.

Also the lack of political will affected, prolonging the wait. This made it difficult to communicate and transport by road from Malaga airport to La Herradura until recent times.

One of the greatest engineering works on the Spanish map

You can verify, as a user of the transfer service, the great engineering challenge that this work involved. Perhaps one of the most expensive roads in Spain, with a similar cost per kilometer to the high-speed train tracks. There are numerous tunnels, several bridges as well as several slopes skilfully drawn between ravines. The road winds between hills and cliffs until you reach the old town of La Herradura.

Not any toll costs in Costa Tropical

The highway that leaves from the airport of Malaga towards the Herradura runs through part of the Costa del Sol and Axarquía. Shortly before arriving at your hotel or destination, we can find beautiful natural spaces. These are the Natural Park of the Sierra de Almijara and the cliffs of Maro-Cerro Gordo on the beach line. In addition, tropical crops such as avocado and cherimoya abound in the area. These tropical fruits are very common, where you can taste them in the restaurants in the area. You can also see some properties climbing the hills. These are usually rustic houses or villas that belong to private land. Small areas of land where families have crops with little agricultural production.

The N340 national road that goes from Nerja to La Herradura is a beautiful road full of natural beauty. It goes under the new highway, through the natural park of Cerro Gordo. However, it is a slower and unsafe road so your driver will not use it unless necessary.

Next to the entrance of the town, after leaving the motorway, you can find two different campings in La Herradura. Both of them close to the beach promenade. Their names are quite similar so you have to notify to our chauffeur your exactly destiny or previously in your transfer booking request:

The famous marina of La Herradura is named “Marina del Este”. This place is located in the area of “Punta de la Mona”, after the main entrance of the town. A little hill kissing the sea, quite and relaxing area with narrow ways. Truly appreciated for his natural environment with a dense grove. We have to pay attention on the signs to arrive to the marina. It’s easy to get lose yourself trough the residential properties.

Weather conditions in your transfers from Malaga airport to La Herradura

The whole route that runs between Malaga Airport and La Herradura runs parallel to the beach. Crossing part of the costa del sol until we reach the tropical coast, which is our destination. The weather is mild all year round, with mild temperatures and little rain, especially in summer. Therefore you will rarely have to worry about the driving conditions of your transfer service.

ROUTE PLANNER: CLICK ON THE IMAGE TO GET THE ROUTE ON YOUR MOBILE DEVICE