Transfers from Malaga Airport to Orgiva

Malaga transfer service has a high percentage of its business composed of repetitions and recommendations. Our growth has been achieved by providing a high level of customer service. All your questions will be answered within one hour. Book your trasnfer from Malaga Airport to Orgiva with us. We offer you, your family and group of friends Málaga Transfers at low cost. to your final accommodation Let Malaga Cabbie organize a safe, reliable and uncomplicated taxi from the airport of Malaga to Orgiva and start your holiday in the best possible way.

Malaga has a high percentage of its business made up of repeats and recommendations. Our growth Has been achieved by providing a high level of customer service all your enquiries Will be answered within the hour, Pre-Book your Taxi from Malaga Airport to Orgiva with us we offer you, your family and group of friends  low-cost Malaga Transfers to your final accommodation. Let Malaga Cabbie arrange a safe, reliable and hassle-free Taxi from Malaga Airport to Orgiva and start your vacation the best possible way.

In Malaga Cabbie we understand that punctuality is essential for passengers and, as a result, our customers from Malaga airport to Orgiva ome return to us again and again due to our unbeatable reliability. Book in advance, we solve your travel problems, remember that we do not charge reservation fees simply pay your driver the fee agreed in advance as simple as that.

First of all Órgiva was also Albacete de Órgiva before. This is a Spanish town and municipality in the province of Granada. It is in the southwestern part of the Alpujarra region of Granada. In the valley of the river Guadalfeo, at the foot of the Sierra de Lújar and Sierra Nevada, about 53 km from the provincial capital. Only 125 km from Malaga International Airport, by transfer from the airport only one hour and twenty-five minutes.

In the year 2017 it had 5570 inhabitants, being the most populated municipality of the whole region. It is also the capital of the Alpujarra region.

A little bit of history of Órgiva

The origin of Órgiva is an ancient Greek colony of “Exoche”. It was mentioned in several writings by the geographer Ptolemy. Its most likely etymology is a hybrid of the Latin hortus and the Iberian ‘river’, the river’s orchard.

It is also true that the first written references to this town appear in the writings of al-Udri (11th century) and al-Idrisi, (12th century). At that time with the names of yuz Aryuba and hisn Orgiva respectively, as administrative district and castle of the cora of Elvira.

During the Nasrid reign it was the head of a taha and took the name of Albastch, which means “plain”. Furthermore, for several centuries it was called Albacete de Órgiva.

In 1492 it was ceded by the Catholic Kings to Boabdil as a place of retreat, then it became the domain of the Grand Captain. Because it finally passed through the dominions of the Duke of Sessa, the Cordoba and Ayala families.

Rebellion of the Moriscos

Like the whole region, the most important historical event was the Moorish Rebellion.

Because between 1568 and 1571 the event known as the “Rebellion of the Alpujarras” took place. In which the abundant Moorish population of the Kingdom of Granada rose up in protest against the Pragmatic Sanction. This sanction limited the religious and cultural freedoms of the Moorish population.

After the revolt was successfully put down thanks to the intervention of Don Juan of Austria. Then the Muslims who survived, approximately 80,000 in the whole kingdom of Granada, were dispersed to other places. Especially towards Andalusia and the Two Castles, to avoid another uprising.

So to make up for the depopulation that followed. King Felipe II encouraged the settlement of peasants throughout La Alpujarra. These came mainly from other parts of Western Andalusia, Castile, Valencia, Murcia and Galicia. People also came from the Kingdom of Granada itself, despite the fact that the established conditions prohibited the settlers from having their origin in the Kingdom. The presence of settlers from other territories of the crown was scarcely significant.

In addition, in 1609 King Philip III decreed the total expulsion of the Spanish Moors. However, this measure did not affect the Kingdom of Granada too much since there were hardly any Moors left in this territory after 1571. 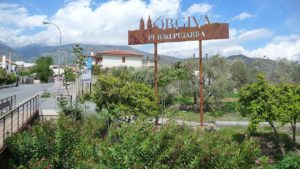 It also belonged to the Marquis of Valenzuela and the Counts of Sástago. By order of Queen Isabel II, it has been the head of the party since 1839.

In Órgiva, the summers are short, very hot, arid and mostly clear. On the other hand, the winters are long, cold and partly cloudy. During the course of the year, the temperature generally varies from 3 °C to 31 °C.

Therefore, the best time of the year to visit Órgiva for hot activities is from the end of June to the end of August. Although there are all kinds of rural activities all year round, such as hiking, horseback riding, or tasting a good Alpujarran dish.

The hot season lasts about three months, from mid-June to early September. During that time the average daily maximum temperature is more than 27 °C.

On the other hand, the cool season lasts about 4 months, from mid-November to March. During that time the average daily maximum temperature is less than 16 °C.

The likelihood of wet days in Órgiva varies throughout the year.

The wettest season lasts from the end of September to mid-May. With a probability of more than 9 % that a certain day will be a wet day

The driest season lasts about 4 months and coincides with summer, from the end of May to September.

Among the wet days, we distinguish between those with only rain, only snow or a combination of both. Based on this categorization, the most common type of precipitation during the year is rain only.

Órgiva has a slight variation in monthly rainfall per season.

The rainy season lasts from September 15 to the end of May. Most of the rain falls during the 31 days centered around November.

In Órgiva, the average percentage of the sky covered with clouds varies considerably over the course of the year.

The average hourly wind speed in Órgiva has considerable seasonal variations over the course of the year.

The windiest part of the year lasts about 6 months, starting in November. In addition, the average wind speed is almost 13 kilometers per hour.

Therefore, the calmest time of the year is from May 14th to October 29th.

The perceived humidity level in Órgiva, due to the percentage of time in which the humidity comfort level is blustery, does not vary considerably during the year.

As an important part of the Alpujarra Granadina region. Órgiva’s cuisine is based on agricultural and livestock products and abundant edible and spicy plants. These are from the area. But we must also add that the exquisiteness of the dishes is in the know-how of the cook. The gastronomy of Órgiva and the Alpujarra has influences from the various cultures that have passed through here. Of course the Islamic period is the one with the greatest impact.

Afterwards it would be combined with the tastes and recipes of the Galician, Navarrese… The latter introduced the pig, whose meat is one of the main bases of the gastronomy of the Alpujarra.

In every house, one or two pigs were raised for subsequent slaughter and family consumption. Also in a handmade way are made the loin in orza, black pudding, sausage, chorizo, ham, etc.

During the Romantic period, many travellers visited Sierra Nevada.

Among the most famous dishes from Órgiva are:

Crumbs are a typical dish in Órgiva. There are two variants, which I will talk about are the ones made with semolina flour. The quantities vary, according to the number of people who will eat, so we can’t talk about exact quantities. They are usually accompanied by fish, peppers or whatever you want. You can also make a gazpacho with water, cucumbers or onions, vinegar and salt.

Here at the fair, which is usually at the end of September, there is a migas contest. The photos are from the feast of San Marcos in Tablones, which is an annex of Órgiva.

San Sebastian is the patron saint of Órgiva. His feast day is celebrated on 20 January.

It is held on the Friday before the Friday of Sorrows. It is a very popular religious festival in this town. The procession of the Christ of the Expiration used to last from six in the evening until six in the morning the next day. But this duration was reduced. In addition, it always comes to accompany a squadron of spenders and the band of drums and trumpets of the Legion.

Also all along the route lots of rockets and artificial castle wheels are fired.

This is the main festival of Órgiva. It is celebrated every year on the last weekend of September or the first of October.

In addition to the livestock fair, the International Migas Competition, in which the majority of the town’s inhabitants participate, is also worth mentioning.

Tourism, Crafts and Food Fair of the Alpujarra

During the Holy Week, there is also this tradition. Although on the last day it is only open in the morning and this time is dedicated to seeing the results obtained during the week.

It is held in the sports hall in Rio Chico. It is of great importance in the economy of the town and the whole region. Because all the craft workshops in the area participate, as well as the commerce and small industry of the Alpujarra.

In Órgiva there is one of the most important Hippy communities in Europe.  It is mostly made up of British, German, Dutch, Swedish, French and other Europeans.

This community usually celebrates every spring, since 1997, the Dragon Festival. More than 20,000 people have attended. However, in 2.003 the City Council prohibited it because of the inconvenience it caused to the local residents.

But even so it continues being celebrated very near in the place of Los Cigarrones, without authorization.

Due to the flooding caused by the rains in 2010 and the overflow of the Guadalfeo River, the festival was moved.

In addition it is necessary to emphasize that it is the greater concentration hippy of all Europe. The Dragon Festival, in the area of Los Cigarrones, in Tablones, an annex of Órgiva, is the meeting point of young and not so young people who come from different European countries with a common goal, to celebrate the arrival of spring with music, coexistence, and as they say “in harmony with nature”.

No one could have thought that the party, which is illegal and unauthorized, could concentrate more than 20,000 people in 2008.

For this party people start to arrive from a week before the event. To welcome the spring with markets, stands, music and all kinds of celebrations with dances and improvised concerts.