Transfers from Malaga Airport to Vera

Malaga transfer service has a high percentage of its business composed of repetitions and recommendations. Our growth has been achieved by providing a high level of customer service. All your questions will be answered within one hour. Book your trasnfer from Malaga Airport to Vera with us. We offer you, your family and group of friends Málaga Transfers at low cost. to your final accommodation Let Malaga Cabbie organize a safe, reliable and uncomplicated taxi from the airport of Malaga to Vera and start your holiday in the best possible way.

Malaga has a high percentage of its business made up of repeats and recommendations. Our growth Has been achieved by providing a high level of customer service all your enquiries Will be answered within the hour, Pre-Book your Taxi from Malaga Airport to Vera with us we offer you, your family and group of friends  low-cost Malaga Transfers to your final accommodation. Let Malaga Cabbie arrange a safe, reliable and hassle-free Taxi from Malaga Airport to Vera and start your vacation the best possible way.

In Malaga Cabbie we understand that punctuality is essential for passengers and, as a result, our customers from Malaga airport to Vera ome return to us again and again due to our unbeatable reliability. Book in advance, we solve your travel problems, remember that we do not charge reservation fees simply pay your driver the fee agreed in advance as simple as that.

Vera is more than two thousand years old, and is also the meeting place of many cultures throughout its history. From the Carthaginian Barea, the Roman and Muslim Baria to the birth of the current Vera.

All this can be found in the Municipal Historical Archive and also in several archaeological sites. These are all over the municipality.

Under Muslim rule, the population moved from the coast to the interior, at Cerro del Espíritu Santo. Its reconquest was in 1488 by Ferdinand the Catholic. The Christian army made its headquarters in the vicinity and it was there that the Moors from the towns in the region took their oath of loyalty.

Furthermore, in 1494 the Catholic Monarchs granted it the title of Very Noble and Very Loyal City, fueros and recognition as a city.

At the beginning of the 16th century it suffered a very strong earthquake. In which more than 150 people died. That’s why it moved to the current site. Three of the remaining inhabitants, after the consent of Charles I to rebuild the city, shot an arrow and where it fell, they made the village rise.

The new city was built in 1520 and had a square floor plan, closed by walls adorned with eight towers with battlements. Then the church-fortress of Nuestra Señora de la Encarnación was built. It is sober on the outside and Gothic-Mudejar on the inside (being a fortress church, it has an aquifer in the subsoil that was used for drinking in case of having to take shelter there due to a war. It does not have a cemetery like the other churches, so along with the one in Seville, they are the only two Spanish churches with an aquifer under the ground). And also other churches as and emblematic places:

During the 16th and 17th centuries the Moorish uprisings and Berber incursions following the assault on Adra in 1620 caused insecurity and hardship until the Moors were expelled from the Kingdom of Granada.

In the 18th century, attempts at modernisation led to the creation of the Real Sociedad Económica de Amigos del País de Vera in 1775. 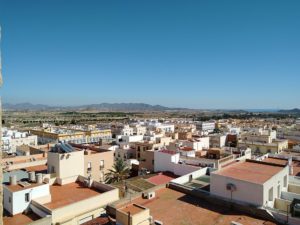 In the 19th century the city also suffered several epidemics and the war against Napoleon.

The 20th century brought a new economic development to the municipality through mining, in Sierra Almagrera (Cuevas del Almanzora). Also in this century the agriculture grows. In addition, from the 60s of the 20th century the expansion of tourism and an enterprising industry began.

Vera is a coastal town in Almeria that lies 103 metres above sea level.

The weather in Vera is considered a local steppe climate. Because it rains very little throughout the year in Vera. That is why the climate of Vera has a classification as BSk by the Köppen-Geiger system.

The average temperature in Vera is 17.7 °C and the average rainfall is 261 mm.

For all these reasons we believe that the best time to travel to Vera in the province of Almeria is from May to October. Because in that period the weather conditions are more pleasant and also in a warm climate there is hardly any rainfall.

Moreover, in summer the average maximum temperature in Vera is 29°C, with July being the hottest month. On the other hand January is the coldest month with an average of 15°C. Vera’s weather and climate are suitable for a holiday and escape from the city.

Vera’s average climate figure is 9.0. This is based on several factors, such as average temperatures, precipitation possibilities and weather experiences compared to other parts of Europe.

The mountain ranges that surround Vera, as well as its proximity to the Mediterranean Sea, and the rivers that run through it. Although they are not very large, they are also important. These are the main factors affecting the climate of Vera and the province of Almería in general.

The best beaches in Vera

First of all it must be said that Vera has a wonderful coastline on the Levante Almeriense coast. Surrounded by hidden coves in the Almagrera and Cabrera mountains. But it also has extensive beaches of fine golden sand, tucked in by a unique line of flora, the envy of the whole region.

Vera also has seven kilometres of beach between two main beaches (Puerto Rey and El Playazo). It is characteristic of its beaches that are a great natural reserve of fine and golden sand. In which both naturist and textile tourism coexist perfectly.

The success of the coexistence of this model of tourism is that naturism has been practiced in a very specific area since its beginnings. Specifically in the northern stretch of the Playa El Playazo, while tourism with a preference for textiles has been choosing the southern stretch of the Playa del Playazo, the Playa de Puerto Rey and the Playa de Las Marinas-Bolaga. That is why each person has the freedom to choose the way they want to live and enjoy their free time, their leisure, being able to choose one area or another. But always with total respect for both parties, since both types of tourism when they choose the Vera destination know this circumstance.

Near the coast you can also find the Puerto Rey Lagoon, mouth of the Antas River, recently declared a natural reserve.

The Puerto Rey Lagoon, also known as Vera Lagoon, is a small lagoon formed by the Antas River at its mouth. It is a few kilometers from the area of El Playazo. It also has the qualification of Place of Community Importance.

Its environment of reedbeds and bulrushes maintains a considerable number of birds (especially ducks). They use the place as a resting place in their migrations between Europe and Africa.

To the north, it goes into the beach of Puerto Rey, where there are more than two thousand meters of sand. To the south, is the beach of Las Marinas, bordering the town of Garrucha (Almeria).

In addition, a large promenade links the lagoon with this fishing village.

The typical food in Vera

Vera is a paradise for the senses, and for taste we have its gastronomy. In which, in addition to the fish of the area, there are a number of typical dishes:

Ajo colorao is a dish based on ground potatoes with dried peppers, spiced with ground cumin. But it is also usually added tomato and fish. It is a fish stew with cooked garlic, raw olive oil and seasoned with garlic mayonnaise, and in some places in the province of Almería it is served with panizo buns.

Gurullos are a dough made from wheat flour, water and saffron, tapered in shape and about one centimetre long. They can be used in many recipes, but in Vera the traditional way is to make them with rabbit. Cranes are also a substitute for rice or pasta.

Torticas de avío are a traditional recipe from Vera. These “Torticas” are a dough made from corn flour and covered with a main ingredient: anchovies. And also of a minced onion, tomato, pepper and garlic along with oregano, parsley, saffron, cumin.

It’s a meatball broth that’s been characteristic of Vera for over 400 years.

The wheat pot is a very popular stew. It is prepared with wheat, chickpeas, various meats and flavored with wild fennel. It is also a winter dish that is usually served hot.

This is another of Vera’s typical winter dishes. It is made with sirloin meat to which nuts and dates are added.

It’s a hybrid cake between cake and pudding, with a huge amount of date and nut bits.

This is one of Vera’s most popular desserts, which is famous for being one of the representative recipes of Almeria’s gastronomy. It is made from drunken sponge cake with a syrup bath that gives it a special flavour.

San Antón is the patron saint of animals, so there is a competition in the village in which the most beautiful, curious and funny pets are rewarded.

At midday a Mass is celebrated in honour of San Antonio Abad and then the animals and pets are blessed by the parish priest. It is worth mentioning that the statue of San Antón goes in procession, which a neighbour rescued and restored after surviving the Civil War.

It is a spontaneous and popular festival, since the first centuries of the Modern Age. During these days there are parades of groups and groups parodying the events of local and regional life

It is a festival of the people of the Levante Almeriense, which has great roots among the residents of Vera. Its date depends on the Holy Week. It is celebrated on the Thursday that begins Lent, between Ash Wednesday and Holy Week.

The origin of this fiesta is an agrarian rite linked to the fertility of the land to celebrate the rebirth of life.

The old woman (la vieja) is a paper and rag doll, with her head filled with sweets and candies. At the end of the day, she is nailed to a stick and stones are thrown at her so that the golsinas inside her come out.

The history of Semana Santa Veratense was born after the Christian conquest. As in the rest of Andalusia, every day of the week one or more brotherhoods go out in procession. With their images and accompanied by music bands, Nazarenes…

In 1888, on the occasion of the celebration of the fourth centenary of the conquest of Vera by the Catholic Monarchs, it was decided to name the Virgin of Sorrows Patron Saint of Vera from this date. It is celebrated on June 10. With different acts like the traditional parade of Moors and Christians, the one of Giants and Bigheads, a floral offering and the popular verbena in the Main Square.

It is a tradition since the Christian troops of Lorca came to lift the siege of Aben Humeya, 1569. And they brought an image of the Virgen de las Huertas. Therefore, to commemorate this historical event, a chapel was built in the countryside. And on the first Sunday of September they went on a pilgrimage, in a country festival.

Fair and Festivities in Honor of San Cleofás

Vera’s patron saint is St. Cleophas. Because on September 25, 1569, the siege that Vera suffered by the Moorish troops was lifted. From then on, the Vera Fair is celebrated every year. Which is always the last week of September.

Pilgrimage of the Virgen del Cisne

It is a recent tradition brought by Ecuadorian emigrants.